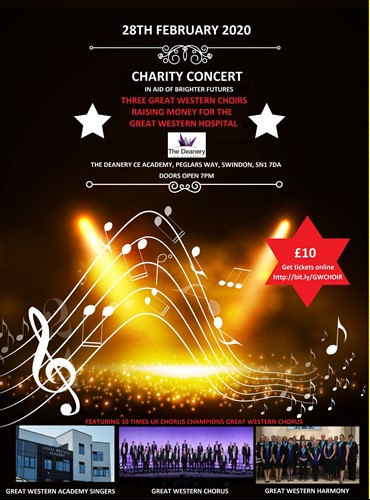 We are delighted to be supported by three Great Western choirs who are putting on a fabulous charity concert raising money for the Great Western Hospital.

The three choirs are:

Ten times UK Chorus Champions the Great Western Chorus.  The chorus was formed back in 1974 and are the founder member of the British Association of Barbershop Singers. They represented the UK three times in the World Chorus Championships; California [2009], Missouri [2011] and Orlando Florida [2018]. Their reputation for entertainment has garnered performances at The Royal Albert Hall, the Theatre Royal Drury Lane, The London Coliseum, The Barbican, The Royal Festival Hall and more locally at the Colston Hall in Bristol.

The Great Western Harmony choir was formed in 2014 at the Great Western Hospital and is made up staff from across the hospital from either an acute, clerical or community role and includes some of our much valued retired staff.  They sing purely for enjoyment and friendship and perform regularly for patient groups, hospital visitors, care homes, outdoor local concerts, Christmas events, in shopping centres, weddings and each year perform with Highworth Silver Band, all raising money for the hospital's charity Brighter Futures.

Great Western Academy Singers are a new choir made up of pupils from the Great Western Academy. Situated in Tadpole Garden Village, Great Western Academy opened in September 2018 and their sixth form opened in September 2019. As well as providing a strong academic foundation they ensure their students have the skills to thrive as independent thinkers, creative problem solvers and adaptable, lifelong learners. Inspirational teaching, enrichment sessions including the school choir provide opportunities to learn beyond the classroom giving every student the best possible chance to succeed in whatever they want to do in the future.