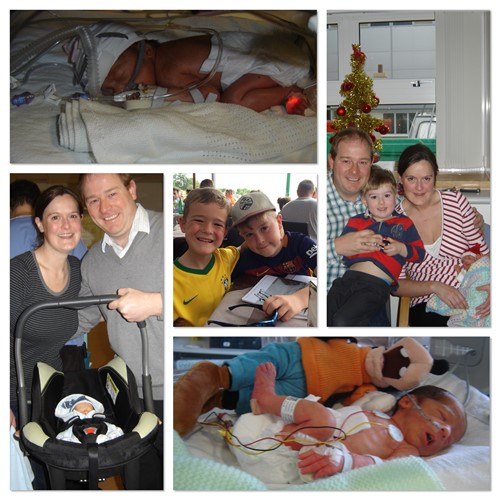 The pregnancy had been relatively straightforward. I had had extra scans to keep a close eye on things due to previous pregnancy complications. A scan a week before Thomas’ early arrival had shown no cause for concern.

On my first Monday of my maternity leave I had spent the day Christmas shopping and noticed some mild abdominal pain in the afternoon. I spoke to my midwife who suggested to take some paracetamol and rest. A couple of hours later with no relief, I was advised to go the delivery suite for us to be checked over. Monitoring revealed no problem and the pain settled so I returned home.

Suddenly, I had the feeling that my waters had broken but it was in fact severe bleeding. We returned straight away to the delivery suite where they diagnosed a placental abruption. Due to how early this was in the pregnancy we were closely monitored that night to enable steroids to be given to strengthen Thomas’ lungs before he was delivered. As my condition worsened an emergency section was performed early the following morning. During the night we were made aware of the fact that Thomas would be transferred straight away to SCBU and what would be likely to happen once he arrived. To say we were worried is an understatement.

Immediately after delivery we very briefly saw Thomas before he was taken away to SCBU. It was such a whirlwind. My husband Mark went to see him after a couple of hours and took a photo so I could see him properly. I was taken round on the bed after that. From that first moment, all the staff on the SCBU were fantastic. They calmly explained what was happening and what to expect over the next hours and days. 24 hours previously, in the midst of Christmas shopping I could never have begun to imagine that a day later we would be the parents of a premature baby in an incubator in SCBU.

Thomas proved to be a fighter from the very beginning and despite initial thoughts, whilst needing support for his breathing via CPAP he was not ventilated. The worst day was 3 days later as concerns arose that he had a bowel infection and may need to be transferred to Bristol. He got through that too and from that day on became stronger  and stronger.

We spent Christmas on the unit with Thomas, which was a difficult time, particularly with another son, then aged 4. It was actually a really pleasant day, thanks to the efforts of all the staff there. We met some other parents during our time there which gave us all strength and support and was very valuable.

Thomas came home with us just three weeks later. This was wonderful but also quite daunting considering how early he was and how small he still was but we were well supported and made to feel ready.

We will never forget that Christmas. The staff on the unit made what was a difficult time significantly more bearable and helped Thomas develop into the lovely little boy he has become. He is now a lively soon to be 6 year old, for whom we will always remember how lucky we are.