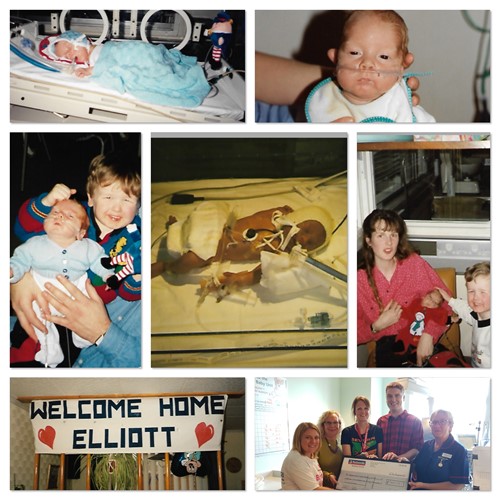 On 25th November 1993 I attended what was a routine 30 week check up and mentioned to the consultant that I'd been experiencing what felt like labour pains for 4 weeks. I was examined & found to be 2cm dilated so I was admitted immediately.

It all felt pretty surreal as I didn't feel any different to how I'd felt for the past month, yet all of a sudden there was what seemed like mass panic. I had a 2 year old son back at home and all I wanted was to get back home to him, yet the hospital were adamant I had to stay in.

I was put on a drip to try and postpone the labour and given steroids in attempt to mature my baby's lungs should he be born anytime soon. I was asked if I wanted a tour of the special care baby unit, but declined as I was sure that my baby wasn't about to be born; it was November after all - my baby wasn't due until February!

The staff were amazing and gave me so much support. I was sat in hospital not feeling any different to how I'd felt since I was 26 weeks pregnant, yet all around me preparations were going on for my son's imminent birth.  I was scared.  Really scared.

After 3 days on the drip I was continuing to dilate, so at teatime, it was removed and I then just had to wait....

In the early hours of the next morning - at 1.14am on Monday 29th November - my son Elliott was born. He let out the tiniest cry which was such a relief to hear. He was then whisked off by the SCBU team where he would spend the first 3 months of his life.

The next few weeks were a complete whirlwind as my precious baby boy fought for his life. He encountered problem after problem – breathing difficulties, a hole in the heart, pneumonia and several blood transfusions. He wasn’t expected to survive due to the complexity of some of the health issues he had, and if he did he might not reach his first birthday. The support I received from the staff in the unit was second to none and they did everything they could to try to make what was a terribly difficult time in my life as stress-free as possible.  Nothing was ever too much trouble for them and they kept me informed every step of the way on Elliott’s progress.

They would ensure that I could do Elliott’s early evening feed every night, once I’d put his big brother Miichael to bed as it was difficult dividing my time between my two young children who both needed their Mum.  Elliott’s named nurse Rachel was my complete rock during his time in the unit and it was her support during some of the lowest points of my life; watching my child fight for survival, that kept me going.  She has always stayed in touch with us and is one of my closest friends.

Elliott spent 3 months in the Special Care Baby Unit, defying all the medics with his very apparent fighting sprit and his will to live.  After several setbacks, he was finally allowed to come home on 14th February 1994 - 2 weeks after his due date...

No one could foresee what life would hold for Elliott after he left SCBU but, despite initial developmental delays, he went on to have a normal and happy childhood; doing well in his school studies and enjoying many out of school activities such as swimming, guitar, cello and singing lessons.  He attained a Merit in his Grade 8 Musical Theatre singing exam aged just 15, (2 years earlier than expected!).

Elliott is now 24 years old, and works as an Overpayments Specialist for a Swindon-based government service provider.  He is also a talented singer who can often be seen gigging around his home town, mostly giving up his time for free to take part in charity/community events. I am so proud of the amazing young man he has grown into: he is funny, clever and has a heart of gold.  He is also my best friend. Looking at him now, you would never believe he had such a shaky start to his life.

I will never forget Elliott’s time in SCBU; its something that will stay with me forever.  It is down to the staff’s expert care and knowledge that he is here today and I will always be in debt to them for that, which is why I felt so compelled to set myself the physical challenge of running a half marathon to raise funds for Brighter Futures and the unit who perform miracles every single day – thank you all so much.