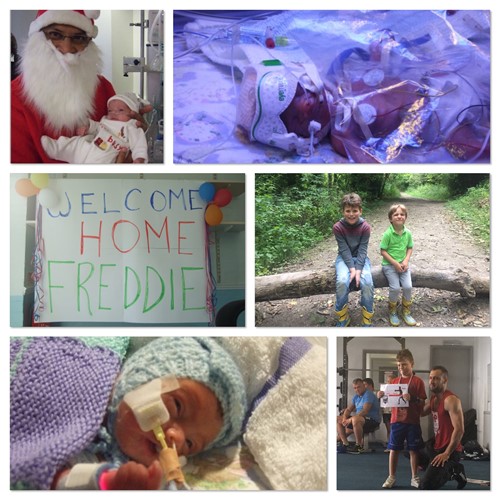 I had previously had a miscarriage after PROM at 18 weeks in December 2006. This second pregnancy had began in April 2007, I had some bleeding at 12 weeks which I was told not to worry about and I was also hospitalised for HG around 16 weeks. After that all began to progress normally.

On Sunday 23rd September 2007, at 24 weeks we decided to go out for a special lunch as things seemed to have settled down and I was finally enjoying my pregnancy, but we arrived home and all of a sudden I felt very uncomfortable and as I tried to relax, my waters broke.  We immediately called the maternity unit at GWH who asked us to come straight in. It was confirmed with a scan that there was very little fluid left around our baby, but most importantly he was still alive and a good size for his gestation. I was immediately put on bed rest with antibiotics to stop any infection.

The next day we were introduced to the paediatric consultant Dr Zengeya, who informed us of all the complications relating to having our baby this early. Our baby only had a 40% chance of survival if he was born at 24 weeks week and if he did indeed survive there were so many possible outcomes that being so premature could bring including, brain damage, cerebral palsy, autism, vision and hearing problems, it seemed almost endless, very overwhelming.

The first thing I would need straight away was steroids to mature his lungs as much as possible. I was not yet having any contractions, a good sign and would be monitored every day. The main objective was initially to try and get him to stay put as long as possible and as the SCBU unit at GWH didn't really have the capability to take on babies born before 28 weeks and they would prefer to get us moved into a more specialised unit at Bristol or Southampton if he was to arrive now. Despite this during the week we were shown around the SCBU unit by the lovely Caroline (Giddings) and I felt comfortable that when my baby did arrive he would be in the best hands.

The week passed by and very little changed, on Saturday 30th the decision was made to send me home to rest, I was nervous, but my baby was still growing and knew I would feel more relaxed at home. But on the Sunday afternoon, I started to feel pressure and pains across my abdomen, being only 25 weeks I wasn't entirely sure what this was but knew it didn't feel right. I suddenly realised these must be contractions, I panicked and rang the hospital we were rushed in and checked over, my baby was engaged and YES I was in labour! They began looking at options to move us to Bristol, Oxford or Southampton, but unfortunately as were no beds available there was no choice but to stay put in Swindon.

On the morning of 1st October 2007, my baby was ready to be born, there was an almighty rush to get the neonatal team there ready to take control. Not long after 7am Freddie was born, we heard the faintest raspy little cry as he was whisked across the room, he weighed 848 grams, so tiny!

After over four hours of waiting while he was being stabilised we were taken by one of the senior nurses Nikki (Taylor) to see Freddie. I will be honest, the minute I saw his fragile body, I broke down, he didn't look like a baby. His skin was see through, tubes going in and out of various places, so many wires and a plastic sheet. All the monitors seemed like they were constantly beeping. The enormity of the situation overwhelmed us and I had to leave. Throughout that first day, his dad was constantly up and down to the unit checking on him, while I was still trying to get over the shock of it all. I spent some time taking in the situation and believed no matter what happened from then on we both had to be strong and do whatever we could for our little boy.

The next day arrived and we met with the SCBU team, they said that initially he was stable, this was known as a 'honeymoon period' and we would need to expect things to change very easily, like a rollercoaster. Over the next few days while we were still staying in the hospital, we spent a lot of time down in SCBU meeting all the nurses that were looking after Freddie. Martin was one of the first we spent time with and he explained what all the machines, tubes and monitors were doing to try and help Freddie, they were all so supportive and answered all our questions. We were shocked to hear that he was also being given morphine to help keep him sedated in order to allow all the medical equipment to do its job. His brain as expected showed some grade 2/3 bleeds that were being monitored, lungs were not yet opening fully and the hole in his heart was yet to close.

The first few weeks were very monotonous, nothing seemed to be changing, his lungs were not improving enough to progress, the bleeds on his brain stayed the same, he needed various blood transfusions and changes in medications. In order to give his lungs a rest to try and get them improving, they tried an oscillating ventilator. It was scary to see his tiny body vibrating but he struggled to maintain his oxygen levels and was having many bradycardia episodes, so he had to go back on the regular ventilator. We felt like we were stuck in a limbo, and after a concerned meeting with a consultant they feared that if he didn't start to need less help with his breathing he would die, we were offered the option to give him some extra steroids to try and change this, but they came with a risk that he could develop cerebral palsy. It was heartbreaking to hear but our decision was easy, he had fought for this long already and we gave permission for them to give him whatever they thought might help him survive.

A week or so passed and the steroid treatment seemed to be working, the bleeds on his brain were shrinking and he was finally improved enough to move on to CPAP.  After over a month of waiting, we were finally be able to hold our son!!! He was so tiny and it didn't feel like holding much more than a blanket but it was fantastic and started the beginning of the long but rewarding road to taking our special baby home.

As a mother I personally struggled with providing enough breast milk for him, which being so extremely premature it was a necessity for him to have. Pumping was hard work and especially with not being able to have much physical contact with my son, it soon dried up. I felt like a failure and was so upset I wasn't able to give him what was best for him. Once again the team on SCBU were there to help and advised that I visit my GP and explain the situation. I was prescribed domperidone, after a week or so taking this it helped bring my supply back and I felt so much more positive again.

During next month he slowly improved more and more, we were able to start feeding him and bathing him he finally felt like our baby. There were still set backs now and again, in mid November the hole in his heart still hadn't closed properly. It was scheduled for him to go to Bristol for an operation to rectify this, we were very apprehensive, would his tiny body be able to cope with a heart operation? But the scan he had on the day we were due to go, showed it had now closed. What a relief!

Christmas in the unit was very special and the visit from 'Santa' was lovely. He finally moved into the nursery just before new year and realised we were finally on the home stretch, he was still on oxygen and had regular eye examinations to check the oxygen wasn't damaging his retina. We still had good and bad days but these were becoming less frequent.

On his due date '9th Jan' he received his 100 day stay certificate which was a lovely memento. During that week, we had a meeting with the SCBU team and community nurses to discuss him coming home. He would still need oxygen and vitamins and medications for us to give him daily, but everyone seemed so excited to finally be sending our son home as healthy as he could be!

On 22nd January 2008, after 113 days in SCBU, he passed his car seat test and we finally took him home, he was on oxygen for a further nine months and had a few hospital admissions for breathing difficulties over the next three or four years, he met all his milestones eventually and although smaller that most other children his age he thrived.

10 years on, he only has a few health and development complications resulting from being so premature. He suffers with asthma and has recently been diagnosed with dyspraxia. He cannot yet ride a bike, but we keeps trying and he believes one day he will be able to do it. He gets some great support at school and is working hard on developing his fine motor skills and although it is frustrating for him sometimes, he takes all his struggles in his stride. Despite his learning difficulties, he has piano lessons, he has completed a self defence course in boxing and loves swimming. He adores his 4 year old brother and is very excited to meet his baby sister, who due in February 2018.

During our time with the GWH SCBU team, we had phoned the unit every morning and night, visited twice a day to bring in breast milk and do what cares we could for him. The whole team were always happy and helpful and we spent many hours getting to know them as well. Other mums of 'long stay' babies became another source of support. It felt like we became very much one big family during our time there. Even though it was many years ago now, we will never forget the time in SCBU or the nurses and doctors who worked tirelessly to save our son's life as well as a shoulder to cry on.