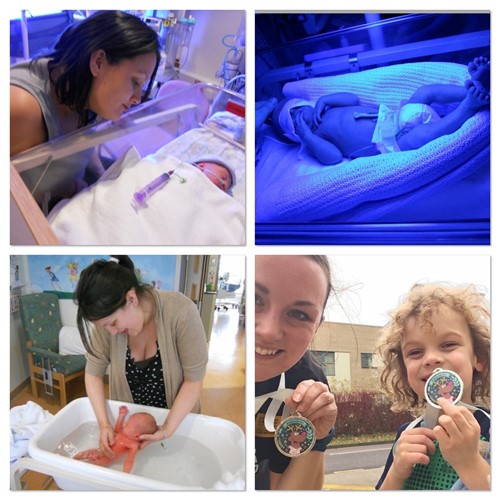 I'd had a healthy pregnancy. At 34 weeks I went out to a fireworks display, felt baby really jump at the noises, then my waters spontaneously broke an hour later. I went in to be examined and was told I would now be staying until I'd had the baby. Contractions started and gradually increased, baby was back to back so the labour was long and uncomfortable. Finally he arrived, we were so relieved!

After a few minutes his colour appeared quite grey and something didn't feel right. His breathing felt fast and shallow. A consultant came in and took him straight away ventilated and in an incubator.

It was quite a few hours before we were able to see him. When we did he was just beautiful. He was in the higher dependency area of SCBU, but was breathing with just an oxygen mask near his face, no tubes in his mouth. We were thrilled to be told he had been pulling the tubes out repeatedly and despite their concerns otherwise, he was managing to breath unaided! He was being given antibiotics for possible infection, and was fed with my expressed milk via a feeding tube. We were allowed a short cuddle before popping him back and watching him sleep. He was now a great colour and although small weighing 5lb, he looked perfect.

The nurses in SCBU were amazing at explaining each element of his care, and what would happen next.

They said he would be in SCBU until near his due date, and would need the feeding tube for a little while (but could also try breast feeding as long as he didn't get too tired), that he would have monitors monitoring his heart rate, and remain in a warmed cot to maintain his temperature. They sensitively explained why each of these elements were important to get him strong enough to come home.

A few days later he seemed unwell and they called me one evening to say his eyes and skin were quite yellow and was clearly jaundice. They began photo therapy and regularly checked his levels. He looked like he was having a sun bed and was very relaxed whenever he was receiving the therapy. The results were not as they hoped and were told a blood transfusion was likely to be necessary. Just before they were about to do the transfusion his blood was checked again and finally his levels of jaundice had decreased. Over the coming days the levels continued to decrease and he was getting a better colour. He was moved to the nursery area of SCBU and was allowed his first ever bath which was so special, and then nurses started getting us ready to take him home. He was able to drink expressed milk from a bottle so no longer needed a feeding tube, and then no longer needed a hot cot, and was able to maintain his own body temperature and started gaining weight.

We were invited to have an overnight stay with him at hospital before we took him home which was fantastic because we could build our confidence and bond with him. Then he passed his car seat test and was allowed to go home.

Tobi is now 7 and despite having autism, developmental delay and severe asthma he is otherwise a  healthy and happy young man. We can never thank the staff in SCBU enough for saving our little man, helping him reach full health and allowing us to take him home feeling confident and supported. We are so grateful and have such fond memories of a very difficult time.