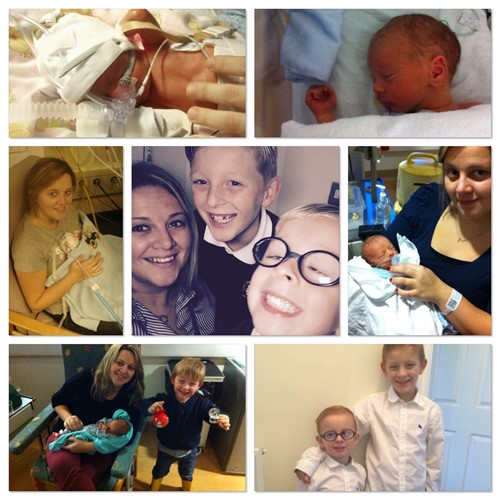 In 2008 whilst visiting family in Devon I ended up in hospital at 26 weeks. After being very poorly my son Jack was born on Friday 7th November at 28 weeks weighing 2lb 2ozs. We were both then in intensive care.

At 4/5 weeks old and once he was well enough Jack was transferred by ambulance to Swindon SCBU so that we could go home. He was in an incubator in the high dependency unit. We visited him everyday whilst I was still recovering and quite poorly myself. The staff and unit were amazing as a first time Mum it was hugely scary.

Jack spent his first Christmas in there.  On Christmas Day the SCBU Santa had left him a gift as well as a card with his foot and hand prints for mummy and daddy. Something so hugely special and always treasured.

Jack grew stronger with the staffs support and eventually came home in January a week before his due date.

4 years later and Jack's little brother also needed SCBU. Again I was quite poorly and in and out of hospital. This time at 34 weeks they decided to deliver as the baby wasn’t growing well.

Seth was born and weighed 4lb 2.5ozs, after a quick cuddle and he went off to SCBU.

He also needed to be in the high dependency unit and in an incubator. He needed oxygen for a day or so and then CPAP.

Again this was around Christmas as Seth was born 18th Dec so his first Christmas was also in the unit. What made this so special were the staff who knew and remembered Jack. He would come and see his little brother and on Christmas Day SCBU Santa had left a gift for them both.

Seth struggled with his feeding so myself and my husband spent a night in the room available by the SCBU unit. Eventually once he was feeding and maintaining his own body temperature Seth can home on 12th Jan- two weeks before his due date.

I can’t thank the unit enough, Jack is now 9 and Seth is about to turn 5 and you would never know what difficult journey they went through at the beginning of their lives.