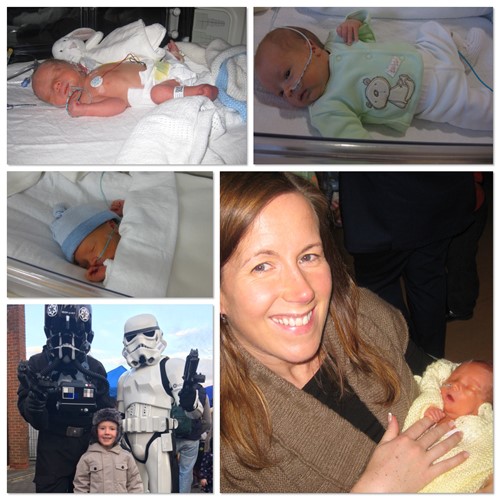 We had been trying to conceive for 5 years.  We had 1 IVF attempt that sadly resulted in a miscarriage, 1 failed IVF attempt, and then on our 3rd attempt I became pregnant with our little boy.  Due to previous surgery on my cervix, I had been told I was at risk of needing a cervical suture, and had regular scans from early on in the pregnancy.

At 17 weeks my cervix was only 1 cm long, and I was asked to go in the following day to have a cervical suture.  At 18 weeks pregnant I was signed off work and was put on modified bed rest at home.   We were warned I was at risk of the baby coming early so at approximately 26 weeks I was given steroid injections.

At 30 weeks my waters broke, and I immediately had to go to GWH where I had my cervical suture removed.  It was such a scary time, and I was kept in hospital then on a heart rate monitor and having daily scans to check our baby was ok.

At 31.5 weeks I developed signs of infection, and our babies heart rate kept dropping, and then everything moved very quickly.  I was told that I would need an emergency cesarean, and that I would be visited by one of the SCBU team to help me understand what to expect.  One of SCBU team came to see us and explained that there would be a team of special nurses/doctors in the theatre, and did an amazing job of trying to explain what they would be there for, and what could happen.  Although we were very scared, we felt reassured by the SCBU team that both ourselves and our baby would be in good hands.  At this point, I just wanted our baby delivered.  The entire pregnancy had been such a worry, and I wanted our baby to be delivered so that he could be cared for and stand the best possible chance.

I had an emergency cesarean, and the SCBU team quickly showed us our baby before taking him to SCBU.  He was breathing and crying which was a good sign.

After the surgery, I was wheeled down in my bed to SCBU where I was able to see our son.  I remember it being one of the most precious times in my life.........he was in an incubator on CPAP with a little comfort blanket we had brought in for him (which was bigger than him!).  He was born weighing 3Ibs 2oz. From there, the SCBU team cared for our son who we named Charlie.  We spent every minute we could with him.

He was only on CPAP for 2 days, and in an incubator for 7 days.  He was then moved to a 'hot cot'.  The SCBU team showed us around the unit, explained to us what all the machinery was for, what all the noises meant on the machines he was hooked up to, and also what machines other children were on so that we were not alarmed by all the bleeps and alarms.  They showed us how to care for him, how to feed him through his nose, how to aspirate the tubes and how to wash him and change him.  As he got a little stronger they took great care and attention in showing us how to bath him for the first time and how to wrap him up, and also how to best hold him.

They showed us how to have skin to skin contact, and discussed with me if I wanted to try breast feeding or not.  I decided not to, as he was so underdeveloped and I just wanted him to put weight on....and my milk had not come in.  But they showed me how to express in the unit, and I gave him what I could supplemented by formula.  They did not try to pressure me and helped me to reassure me every step of the way.

We phoned every morning before we came into the unit to see how he had been overnight, and one morning they told us he had stopped breathing during a feed and had to be resuscitated.  I was overwhelmed with fear when they told me, but they explained in a very calm way that it was not unusual for a premature baby and that he was fine.  When we went in that day, one of the nurses took time to come and sit with us and explain what had happened and what we should do if it happened whilst we were feeding him.

Charlie was in SCBU for 5 weeks and without the care and attention of the nurses and doctors in SCBU he would not be with us today.  We had the opportunity to stay with him for 2 nights in SCBU in preparation for him coming home, we had resuscitation training, and he went through the 'car seat challenge' to ensure he could breath sufficiently in his car seat.  He looked so tiny sat in it, we will never forget that.

The team gave us advise on how best to care for him once we got him home, his sucking ability was not good, so they helped give advise on what teats to try and how to best give him his medication.

Without SCBU we would not have our much longed for little boy, and we were and are so grateful for everything they did, not just for him, but also for us.

Today Charlie is 6 years old and you would never know he was born prematurely!  He is funny, intelligent and the best little boy we could ever hope for.  He has no impact from being born 8.5 weeks premature, and that is down to the care of those in SCBU.  He is doing really well at school and incredibly active doing swimming, martial arts, rugby tots and gymnastics every week!

We will always be eternally grateful.