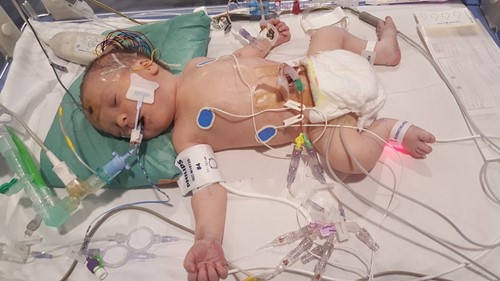 Charlie was born in Swindon on Tuesday 7th February 2017. Whilst the pregnancy and birth itself were normal, Charlie was unexpectedly born "flat" (This is a term they have used to explain he was not breathing) and with his umbilical cord wrapped twice tightly around his neck.

He was resuscitated in Swindon immediately after birth and given a high level of support for his breathing, although, his heart was functioning as expected. As he went 11 minutes before he was able to breath consistently (by ventilation) he was taken into Swindon ICU with concerns that he may be suffering from an amount of damage to his brain, therefore stopping it from sending the breath "command" to his lungs. Based on this information the decision was made by doctors to transfer him to Bristol’s St. Michael's hospital for emergency treatment and a cycle of cooling.

It was explained to us that cooling involved placing him in an induced,
controlled state of hypothermia and reducing his body temperature to 33.5 degrees for 72 hours and treating him with sedative, this would hopefully slow his body and organs down and therefore reduce the amount of pressure being placed on his brain. The aim of this treatment is to prevent further damage and allow his brain time to relax. During this process Charlie received continual blood tests, several rounds of antibiotics and a lumbar punctures (the drain and testing of some fluid from his spine) that appeared to show he may have been suffering from meningitis and HIE hypoxia (lack of oxygen) whilst in the womb.

The process of re-warming Charlie back to a normal temperature began on Friday 10th February at 7pm and was expected to take until 2:30am on Saturday. Although it took a small amount of time longer than anticipated he was successfully warmed to 36.5 degrees by 4am on Saturday. After he came to temperature the process began of lowering his medication and a second lumbar puncture was conducted.

16 hours after warming (Saturday PM) concerns were raised by doctors that Charlie’s brain function still appeared to be very limited, having gradually reduced over the 72 hours of cooling. His movements were also limited and he was still unable to breathe without the aid of a ventilator. It was explained that this was of concern and a greater amount of progress has been expected. Reasons for the lack of progress could not be determined but could include: too much sedative, the reduction in medication was too fast, or that his brain was perhaps just no longer functional and had degraded despite best efforts to prevent this.

He did however have the fact that he had gone to term and was a good size on his side. He had also not suffered any seizures of fits during the warming process.

On Sunday evening, after several agonising days of waiting, Charlie had finally woken by 7am and began to make amazing progress. He had begun to breath above the ventilator and slowly, over 14 hours, was removed from his painkillers, antibiotics and his feeding drip. He then began to opens his eyes, breathe, cry and feed through a tube. At 5 days old, we were finally able to hold our baby for the first time.

On Tuesday and now 7 days old Charlie was still in intensive care awaiting results of the second lumbar puncture and MRI and scan but things were looking positive. We were also now able to dress him for the first time.

We were told to expect another 7 to 10 days before Charlie could be transferred back to his local hospital in Swindon however, due to his progress, this transfer was completed on the Wednesday.  Charlie is now home and continuing to recover and learn to feed on his own.