A special event was held on Thursday 20 October, hosted by the Mayor of Swindon Eric Shaw, to recognise the efforts of local people and to receive three substantial donations which tipped the appeal total into seven figures.

Rotary Clubs from Swindon, Marlborough and Royal Wootton Bassett who together raised £70,000 exceeded their target thanks to their amazing fundraising efforts and a generous donation from Swindon North Rotarian Tony Long.  The Dr Thomas Cranston Wilson Trust presented a cheque for another £50,000 which was pledged to match the challenging target that local Rotarians set themselves in their 15/16 year. 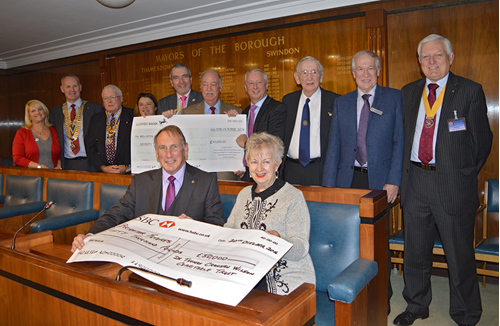 Jennifer Green, Head of Fundraising said: “We’re so thrilled to have reached the £1 million mark and we continue to be amazed and humbled by the efforts and generosity of local people to help us reach our goal.

Every penny raised is a step closer to bringing vital cancer treatment closer to home for families in Swindon and Wiltshire for generations to come.

We’d like to say a huge thank you to everyone who has helped the appeal so far. However, we can’t stop now and already we are focusing on how we reach the next £1million in our £2.9 million total.”

All money raised for the Radiotherapy Appeal will go towards the £2.9 million needed to fund the new Oxford University Hospitals NHS Foundation Trust radiotherapy unit on the Great Western Hospital site.

Cancer patients in Swindon and Wiltshire currently face weeks of daily visits to and from the nearest radiotherapy centre in Oxford for treatment.

Watch our Thanks a million video here https://youtu.be/qYoHRlzo_2M