A bird-like crop circle which has appeared in a wheat field at a farm near Swindon is being used to raise money for Brighter Futures' £2.9m Radiotherapy Appeal. 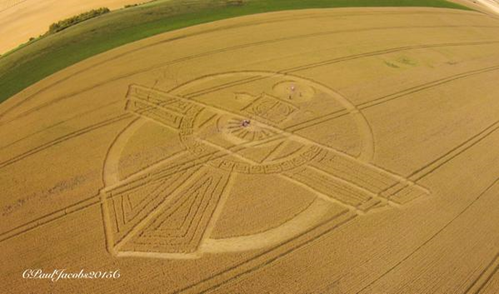 Adults are asked to donate £3 to view around the huge and unexplained crop formation at Weir Farm, Broad Hinton, with all proceeds going to helping bring vital life-saving radiotherapy treatment for cancer patients to Swindon's Great Western Hospital (GWH).

Presently many local patients have to travel to the Churchill Hospital in Oxford on a daily basis for up to seven weeks for radiotherapy treatment, as no such facility is available locally.

Great Western Hospitals NHS Foundation Trust and Oxford University Hospitals NHS Trust are working together to bring a unit to GWH and, subject to national approval, treatment should be available in 2017.

Farmer James Hussey has teamed up with long-time crop circle researcher Paul Jacobs - who is temporarily living in a camper van by the circle which doubles up as crop circle information centre - to offer passers-by the chance to delve into the mysterious creation, which has been likened to the Egyptian Sun God Horus on social media.

Mr Hussey, 57, who lost his wife Gill to cancer last year, said the crop circle's location - metres away from the Ridgeway at Uffcott Down near Barbury Castle - had helped attract interested walkers, raising nearly £5,000 so far.

Mr Hussey, whose family have owned Weir Farm for 108 years said: "The crop formation just appeared one day and I've no idea why or how. The event appears to be an absolute mystery.

"What is absolutely fantastic is that around 1,600 people have seen it so far and have learned about the Radiotherapy Appeal. I know first-hand how important it is to have radiotherapy treatment locally - it's going to happen and I am enthused by Brighter Futures' fundraising appeal.

"The journey to Oxford for treatment for people is a long and difficult one and it really is so important that we raise this money and bring radiotherapy treatment to the Great Western Hospital."

Mr Jacobs said: "After 15 years of looking at these things, and eight of which I have researched them very closely indeed, I can say with absolute confidence the origin of the vast majority of crop circles remains a complete mystery."

"The bio-physical evidence is compelling and really does speak for itself if you care to do the homework".