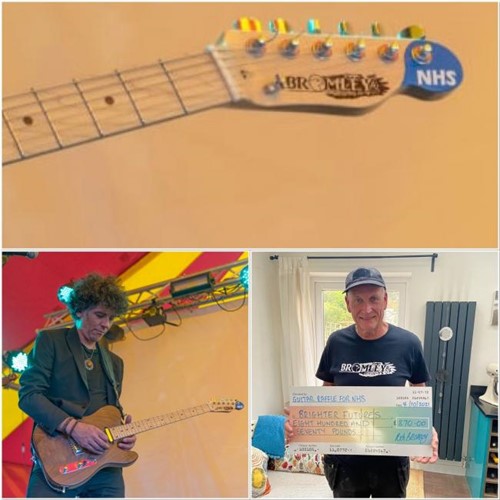 Carpenter Richard Bromley can’t play the guitar. But he taught himself to build one and with the help of a psychedelic rock legend, he auctioned it off - raising nearly £900 for Brighter Futures.

Richard was furloughed during the first wave of the coronavirus pandemic and to keep himself busy he set himself the task of making a guitar from scratch.

“I went to a festival and there was a young lad there who was making one,” he explained.“So I bought a book on how to make one and just started making them. The first two I took to festivals for people to fiddle with and it went from there. I’ve now made over twenty guitars. Although Richard doesn’t play himself, he knew that KozFest 2021 was going ahead in July this year. So he decided to raffle the guitar at the event to raise money to support the NHS. Kozfest is an annual festival held in Woolacombe, Devon that celebrates psychedelic music and arts.In one performance the instrument was played by Kavus Torabi, a British Iranian musician well known in the psychedelic, avant-garde rock field.

This made the guitar even more appealing to the festivalgoers and when it was raffled off it generated £870.00.

“You know how people paint those stones and leave them lying around for people to find? Well, I saw an NHS one,” Richard said, explaining why he decided to use it to raise money for Brighter Futures.“I was furloughed and being paid for nothing so I set my mind to making a guitar for charity and decided to donate everything that I could.“I paid for the cost of the build myself and then all of the raffle ticket proceeds went to Brighter Futures.”

“This was something that I could to do to give back to them.” “I was absolutely gobsmacked we raised that much money. KozFest is only a small festival - 500 people go to that festival.“I wanted to keep it small so that the ticket winner could see their prize actually being played at the event to make it a bit more special,” he explained.

When the cheque was handed over this month, Lisa Utting, fundraising manager at Brighter Futures said: “This was such a unique fundraising story and a fabulous way to thank the NHS. “We would like to say a massive thank you to everyone who supported the guitar raffle and as always thank you to all of the people who take the time and effort to fundraise for Brighter Futures.”

Richard decided he wanted to donate the funds to the CT Scanner Appeal, which is part of the new radiotherapy centre currently being built at the Great Western Hospital.