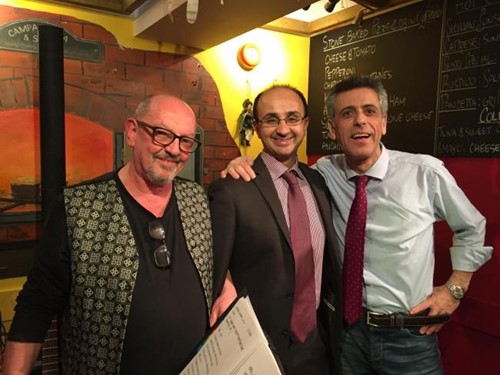 CANCER specialist Omar Khan thanked the people of Devizes for supporting fundraising for a radiotherapy unit when he was guest of honour at Singing For Life.

Dr Khan, who is treating Devizes cafe owner Giovanni Campanella for lung cancer was delighted to see his patient looking so well as he sang and played guitar at Dolcipani Italian Bakery in Old Swan Yard on Thursday evening.

He said: "Gianni is an amazing man but I didn't realise he was so talented." Dr Khan thanked the audience for raising more than £2,500 for the Brighter Futures Appeal at the Great Western Hospital, Swindon.

He said: "This will make a huge difference to people's lives as at the moment many have to travel to Oxford for treatment which is a long way especially when people are not feeling well."

Mr Campanella was diagnosed with lung cancer nearly two years ago and joined forces with Devizes Rotary Club to raise money for the appeal and was joined for the performance by his uncle Vincenzo Bua. Rotary president Cliff Evans said he hoped the total raised would eventually reach £3,000.

Mr Campanella made a moving speech in which he relived the ordeal his sister had faced when she was diagnosed with cancer a few years ago and had to travel to Oxford for radiotherapy.

He said: "She had to get up about 4am so she could be in Oxford for 7am. It took a huge toll on her." Sadly his sister died of the disease but Mr Campanella is doing well and said he had completely changed his lifestyle. He has given up cigarettes and alcohol and has become a vegetarian.

He said: "I have become a different person but I think I owe my life to Dr Khan. I was diagnosed with stage three lung cancer in April 2015, and without the care and support of the Great Western Hospital I wouldn’t be here today.

"The concert is my small way of thanking them for everything they’ve done for me and everyone like me. I’ve been playing guitar for fifty years and my uncle was a professional musician. I could not have done this without him."

During the evening the two men sang and played a mixture of Italian love songs from romantic ballads to more upbeat numbers. Many of the tunes were written by Italians but made famous worldwide by Americans such as Cole Porter.