Lawson Group, the demolition, asbestos and waste management specialist which this year celebrates its 25th anniversary, recently presented Brighter Futures with a £50,000 donation towards its Radiotherapy Appeal.

The donation follows fundraising initiatives led by Lawson Group’s managing director and National Federation of Demolition Contractors (NFDC) president Martin Wilson and includes £25,000 raised by members of the NFDC, the only recognised professional body for the demolition sector. Managing director Martin Wilson currently serves as the NFDC president and in this role nominated the Brighter Futures appeal as his president’s charity.

As a celebration of Lawson Group’s silver anniversary, as well as its continued commitment to the people of Swindon and surrounding areas, Lawson Group has matched the amount raised by the NFDC representing £1,000 for each year that the Lawson Group has been in business -- bringing the final donation total to £50,000.

During his time as NFDC chairman and president Wilson has been eligible to nominate fundraising for charities of his choice.

The donation takes the Brighter Futures Appeal closer to its £2.9 million target for a new radiotherapy centre to be built on the site of the Great Western Hospital.

The cheque was presented by Lawson Group managing director and NFDC president Martin Wilson to Steve Nowell, Chairman of the Charitable Funds Committed of Brighter Futures and in the presence of local MP’s Robert Buckland and Justin Tomlinson.

Martin Wilson, managing director of Lawson Group and president of NFDC, said: “As a company with a 25-year heritage in Swindon it made perfect sense to celebrate our silver anniversary as a company by supporting the Brighter Futures appeal. It’s a fantastic cause and as a local employer for 25 years it’s very important that we are able to help to support the region with this much needed facility.” 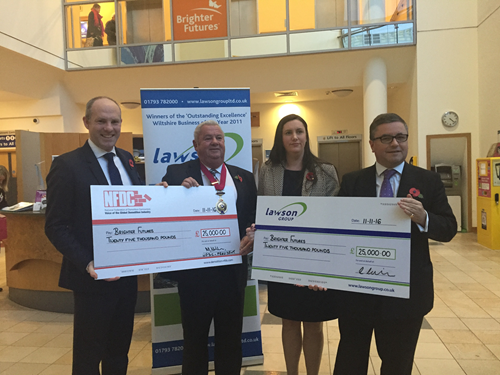 Justin Tomlinson North Swindon MP says “I wanted to take this opportunity to thank the Lawson Group for their very generous donation to the Brighter Futures Radiotherapy Appeal. I was part of the campaign to secure support from the NHS England for the Radiotherapy Centre so it’s brilliant that we have fantastic local companies, organisations and volunteers alike who are busily raising the funds that we need to make it happen. The new centre will mean that patients from Swindon and the surrounding area will in the future be able to receive vital treatment in their own town without having to travel over an hour to the current nearest Radiotherapy centre in Oxford.”

Robert Buckland, South Swindon MP, says: “As a Swindon-based company it’s fantastic that Lawson Group and the national organisation the NFDC has chosen to support the Brighter Futures appeal. The new radiotherapy centre is a much needed resource in the town and surrounding regions.”

Lawson Group was originally established in 1991 as Lawson Demolition & Crushing and focused on the demolition, recycling and management of aggregates from demolition with a focus on waste segregation and reuse at source.

In 2006 the company was restructured with Lawson Group created as the holding company for two divisions – Lawson Demolition and Lawson Environmental, the latter of which focuses on waste management including asbestos removal.