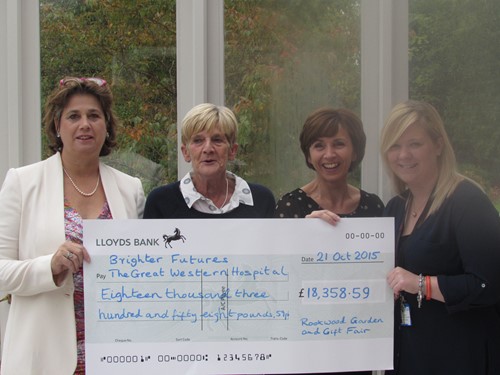 Over £18,000 raised at Rookwood Garden Fair for radiotherapy unit

The Rookwood House Garden & Gift fair, which took place in April this year at Rookwood House, Stockcross raised a record £18,358.59 for the Brighter Futures Radiotherapy Appeal - Tracy’s Journey Fund, which is raising money for a much needed radiotherapy unit at the Great Western Hospital, Swindon.

“We are absolutely thrilled.” says Tracy Moss, charitable fund founder, “Cancer sufferers in Swindon need to travel daily for miles to Oxford to get treatment which is an unnecessarily exhausting and stressful experience. This money brings us ever closer to our goal of having our own radiotherapy unit here in Swindon for the local community.”

With the support from sponsors including; the Greenham Common Trust, Estate agents Knight Frank, Gary Pope at Hungerford NFU, Buzz magazine, volunteers from Vodafone Foundation and friends of the organisers, the money raised took the current running total for the appeal over £200,000.

Next year's Rookwood House Garden & Gift Fair will be held on 21st April 2016, where organisers Charlotte Digby, Marion Moss and Amanda Birley hope to beat the record total raised for the charity and help them get ever closer to equipping a new radiotherapy ward in Swindon. The Fair will feature talks by Polly Wood, proprietor of Polly Wood’s Kitchen Garden school, about growing cut flowers and arrangements demonstrated by Jane Lawrence.

The cheque which was presented to Brighter Futures on 21st October mean the Radiotherapy Appeal has now reached £200,000!

We are very grateful to everyone in the organising team for their hard work. 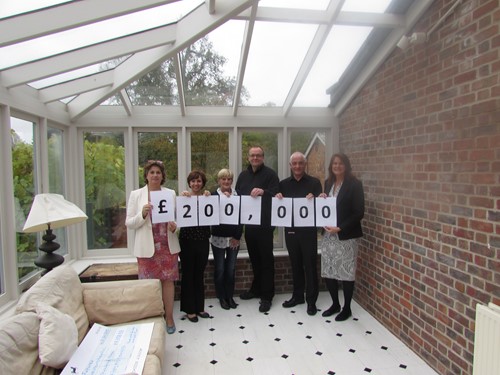 The annual Rookwood House Garden & Gift Fair was hosted in April by Charlotte and Rupert Digby at Rookwood House, Stockcross, near Newbury, and co-organised by Charlotte Digby and Marion Moss. Founded in 2012, the fair has grown in size and success year on year, expanding to over 60 exhibitors from specialist nurseries, garden accessories, high quality gifts and food exhibitors.

Proceeds from the event are donated to Brighter Futures - Tracy’s Journey. Brighter Futures is a Registered Charity (1050892) which raises funds for Great Western Hospitals and community services across Wiltshire. It is fundraising £2.9 million for a new radiotherapy unit in Swindon hospital.