TE Connectivity, whose Swindon site is in Dorcan, has helped pushed the appeal total well over the three quarters of a million mark by donating £10,000.

TE has named Brighter Futures as its Charity of the Year for 2016 and is making the donation through its corporate giving programme, which supports community projects across the globe.

Neil Steptoe, Swindon Community Ambassador for TE, said: “The Radiotherapy Appeal is something that anyone living in Swindon has been touched by. We desperately need a new Radiotherapy Unit in the town.

The appeal has a personal resonance for me as I used to take my brother-in-law to Oxford for radiotherapy treatment, who has sadly since passed away. He had to make the journey from Swindon for four months in 2015 and it was horrendous for him.

I am pleased that we are able to support Brighter Futures and the local community by helping to bring radiotherapy closer to home.” 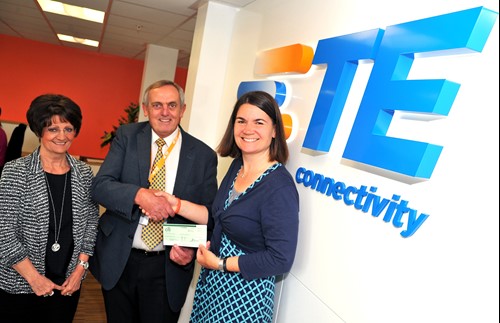 We are so grateful to TE's staff as we know they voted for our Appeal to support us.  This fantastic gift has taken the amount raised for the Radiotherapy Appeal to £770,000.